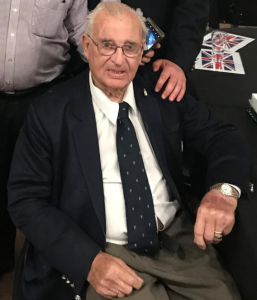 A Hampshire charity is leading the charge to bring a 98-year-old SAS war hero home.

It is hoped that John will secure a place as a Chelsea Pensioner in the Royal Hospital Chelsea but he is currently stranded in Australia awaiting his Covid-19 vaccination. Pilgrim Bandits has launched an appeal to bring him back to the UK – over £7,000 has currently been raised with a target of £10,000.

John Morris joined the Royal Artillery in 1939 at the age of 17 and fought as an Anti-aircraft Gunner in the Battle of Britain. He volunteered for Special Forces and was posted to the Raiding Support Regiment, a branch of the Special Air Service (SAS). John was in uniform until 1946 and then went on to have a career as a Territorial Army Reservist in post-war Britain.

John moved to Australia over 30 years ago and has now fallen on hard times. Pilgrim Bandits CEO, former SAS Warrant Officer Matt Hellyer, said after hearing John’s story, the charity wanted to help out a fellow veteran in need, bringing him home to receive his Covid-19 vaccination and, hopefully, take up his place as a Chelsea Pensioner. He said: “John really needs our help.

“Becoming a Chelsea Pensioner would be a life-changing opportunity for him, but he’s stranded in Australia waiting for his vaccine. He is really grateful for all the support he has so far received – getting back to the UK is his plight, to live a comfortable life surrounded by his ex-military comrades. He’s 98-years-old and has fallen on hard times, simply due to life experiences, which could happen to any of us, so we want to help him.

“The Pilgrim Bandits and John’s regimental associations are leading the charge in his time of financial hardship and all funds raised will create a life-changing opportunity for John and other veterans in similar situations.”

The campaign is gaining good levels of support with The Sun also supporting the appeal.