Poseidon Aircraft Arrives At RAF Lossiemouth For The First Time 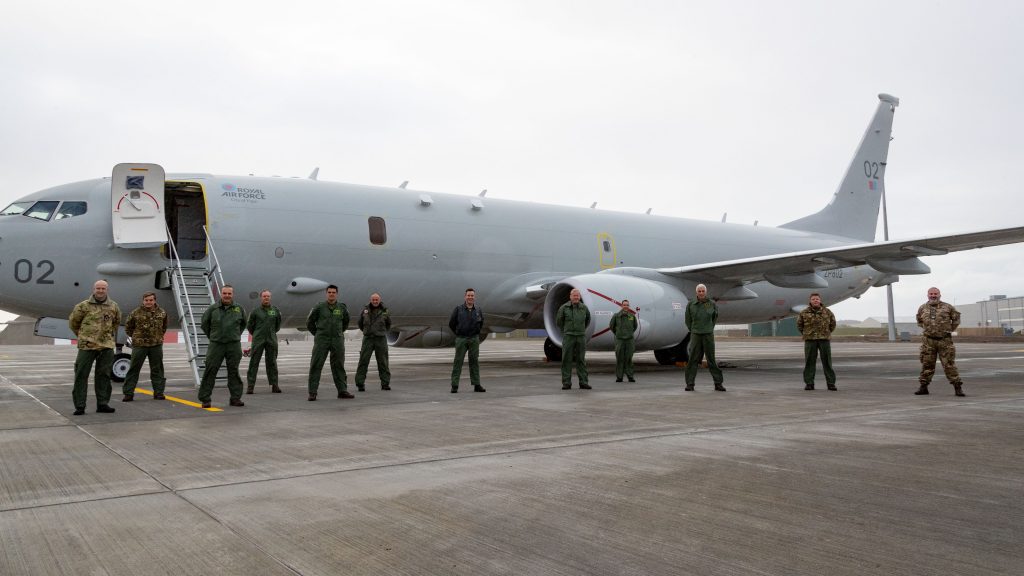 The entire crew of ZP802 stand alongside the Station Commander, Gp Capt Chris Layden, alongside OC 120 squadron shortly after landing.
ZP802, the City of Elgin, touches down at RAF Lossiemouth for the first time after an Exercise Joint Warrior sortie. The aircraft is the second of nine on order for the Royal Air Force. The fleet of Maritime Patrol Aircraft will operate from Moray, Securing the Seas over and around the United Kingdom.

October 13 marked the first landing of a Royal Air Force Poseidon MRA1 at RAF Lossiemouth, the new home of UK maritime patrol operations based in the heart of Moray, Scotland.

Touching down on the newly resurfaced runway, ZP802 named the ‘City of Elgin’ parked outside the brand new £132m facility which houses the pilots, engineers, and personnel who will operate the high-tech submarine hunters.

Nine Poseidon MRA1 aircraft have been ordered, the first of which landed on British soil for the first time in February 2020. Since then, crews from CXX Squadron have been securing the seas over and around the United Kingdom on operational missions. 54 Squadron have also been training new pilots and weapons systems operators on the platform, as 400 additional military personnel will be joining Team Lossie in Moray to fly and operate the nine aircraft.

Poseidon is a hugely capable submarine hunter, able to locate, identify, and track potentially hostile submarines as they operate close to our waters. Its powerful radar is also able to detect and track surface vessels above the waves. It boasts a comprehensive communications suite which means the intelligence it gathers can be passed to commanders whether they are in the air, on a ship, on the ground, or back at RAF Lossiemouth.

“Today is a proud moment for Team Lossie, ushering in a new era for the Station delivering combat air power and maritime patrol operations over and around the United Kingdom.

“Yesterday I had the privilege of landing the first Typhoon on our newly resurfaced runways, and today I had the pleasure of welcoming in the first Poseidon to its permanent home in Moray. This is just the beginning of our expansion and modernisation as one of the RAF’s most strategically important Stations in the United Kingdom.”

The £75m programme to resurface RAF Lossiemouth’s runways and operating surfaces began in January 2020, with the work being carried out by VolkerFitzpatrick. The work has involved stripping, strengthening, and resurfacing all of the runways, taxiways and dispersals. From July 2020 both runways were out of use while the intersection was resurfaced, which meant no fixed wing flying could take place. Quick Reaction Alert temporarily moved to Leuchars Station in Fife, with Typhoon training continuing at Kinloss Barracks.

By Friday 16th October, all Typhoon and Poseidon operations including Quick Reaction Alert will be back at their permanent home in Moray. Over £400m is being invested in RAF Lossiemouth to future-proof the Station for years to come, which includes the scoping for the world’s first digital air traffic control tower on a military airfield.

Team Lossie is comprised of over 3,000 people, which includes regular and reserve personnel, civil servants, and contractors. The Moray base is responsible for defending the United Kingdom’s skies and seas with four front-line Typhoon squadrons, as well as CXX Squadron operating the Poseidon Maritime Patrol Aircraft, and 201 Squadron which will re-form in 2021.