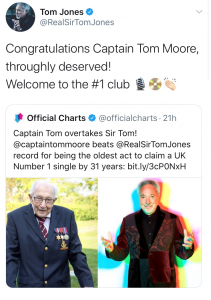 He has raised over £29M on his JustGiving page (so far), inspired millions around the globe and he has a number 1 hit at the age of 99-years old – the country has been captivated by the story of Captain Tom during the outbreak of COVID19.

Now, Sir Tom has taken to social media to congratulate Captain Tom. Sir Tom said, “Captain Moore, from one Tom to another congratulations on beating my chart record. If I was going to lose to anybody, it’s an honour to have lost to you, with all you have done raising money for the NHS.”

More than 800,000 people have donated to Captain Tom’s page after the 99-year old veteran vowed to complete 100 laps of his garden before his 100th birthday on April 30 to raise money for NHS Charities.

The news of Captain Tom’s chart success means he will still be at the top of the charts on his centenary.

Once again, congratulations Captain Tom from us all at Pathfinder International magazine