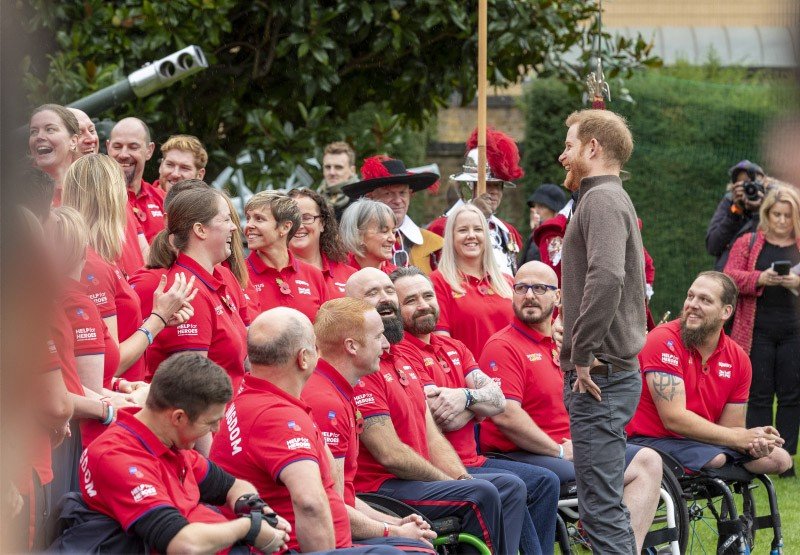 The team of 65 wounded, injured and sick serving personnel and veterans that will represent the UK at the fifth Invictus Games in The Hague next year was officially unveiled at the Honourable Artillery Company, London…

The team were joined by His Royal Highness the Duke of Sussex, Prince Harry, who posed with the competitors for the first official team photograph and wished them luck for the Games in May 2020. The competitors, 89% of whom are new to Invictus, were also joined by the Minister for Defence People and Veterans, Johnny Mercer, service personnel from the Honourable Artillery Company and former Team UK captain, Mark ‘Dot’ Perkins.

Defence Secretary Ben Wallace said: “I wish the best of luck to the team selected to represent the UK at the Invictus Games next year and look forward to following their journey from training camps to The Hague. The Invictus Games are a powerful reminder of the ability of sport to inspire and support the recovery of wounded, injured and sick serving personnel and veterans.”

In July 2019, WIS personnel and veterans competed in nine sports over five days at the Invictus UK Trials hosted by Sheffield. Over 350 individuals applied for one of 65 places available on Team UK to represent their nation at the Invictus Games 2020. The rigorous selection process for Team UK was based on the benefit the Invictus Games will give an individual as part of their recovery, combined with performance and commitment to training.

Hannah Lawton, Chef de Mission for Team UK, said: “The 65 men and women selected to represent Team UK will not only gain a personal recovery benefit from taking part in the Games but they will hopefully inspire others suffering with life-changing injuries or illnesses that anything is possible.

“Our competitors are proudly serving their country again and showing that they will not let their injury or illness define them. As a team, we are especially proud of the fact that 89% of Team UK have never competed in the Invictus Games before. We are very proud to be working alongside these 65 athletes and wish them the best of luck as they embark on their Invictus Games journeys.”

Team UK also unveiled its first female captain, RAF veteran Rachel Williamson. While playing for a RAF team, Rachel received a rugby injury, which developed into a functional neurological disorder, and she ultimately lost the ability to use her arm completely. She almost gave up on fitness forever. This year she will compete in Athletics, Indoor Rowing and Swimming.

She said: “So far, my recovery journey has taken me from rock bottom to laying down a new foundation, this year I aim to build the new me and take the final step to where I want to be. I’ve accepted my injury; learnt I can let my emotions go and not be embarrassed or afraid about asking for help. Now it’s time I raise the bar by trying new sports, being positive and happier with less excuses.

“The Invictus Games offers an amazing opportunity through sport to regain that sense of pride which can be lost following the onset of mental or physical disabilities. Sport empowers us to refocus our attention on what we can do, rather than what we can’t. To be selected as Team UK Captain is truly an honour and I feel immensely proud to be given this opportunity.”

The team will compete in nine sports: Athletics, Archery, Cycling, Indoor Rowing, Powerlifting, Sitting Volleyball, Swimming, Wheelchair Basketball and Wheelchair Rugby. They will continue to train from now until May 2020 as part of Help for Heroes’ extensive Sports Recovery programme and role to train and develop the team.

The Royal British Legion will be supporting the friends and family, including carers, of Team UK as part of its work to recognise the vital and valuable contribution that they make to the recovery of WIS service personnel and veterans.

The UK delegation to the Invictus Games The Hague is being delivered by a partnership comprising the Ministry of Defence (MOD), Help for Heroes, and The Royal British Legion.