The Army Marks Cenotaph Centenary With A Sound From The Trenches 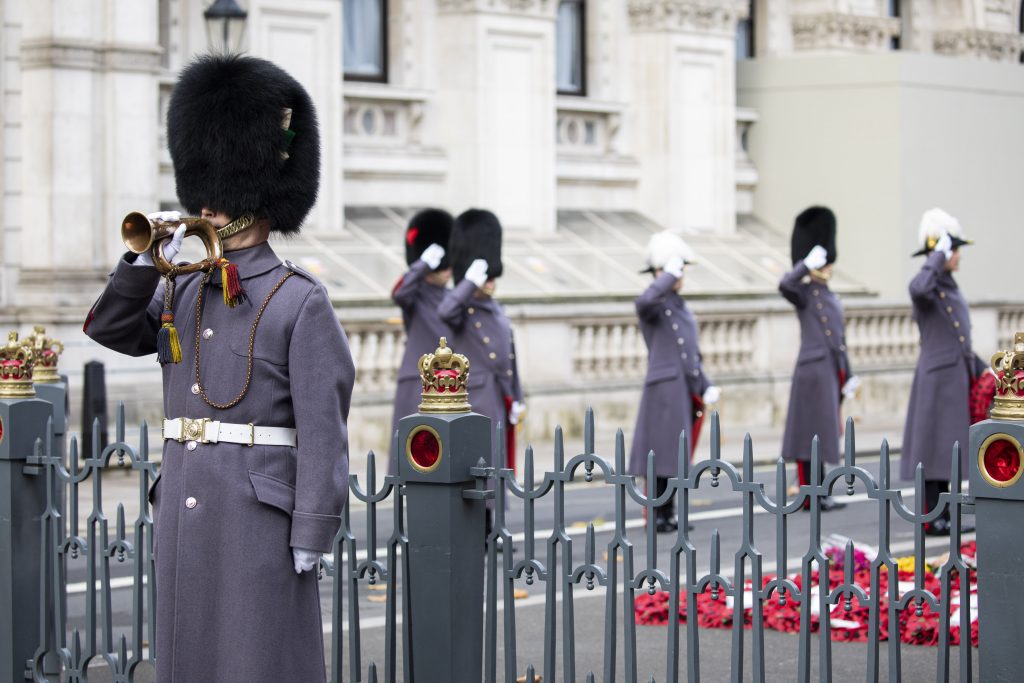 Image of Lance Sergeant Stuart Laing, performing the Last Post and Reveille, at the Cenotaph in London (11/11/2020) to mark Armistice Day. The bugle seen here being played was recovered from the battle of the Somme in 1915.

One hundred years ago thousands gathered in Whitehall to witness the unveiling of the Stone Cenotaph 100 years ago by King George V. Yesterday (11 November 2020) Lance Sergeant Stuart Laing from the 1st Battalion Welsh Guards recreated the most poignant of moments at the exact time, in the exact place, that it occurred 100 years ago, by playing the Last Post to mark the start and the end of the silence on an instrument that had called men into battle in the First World War.

Lance Sergeant Stuart Laing performed the Last Post and Reveille on an instrument recovered from the mud and blood of the Somme in 1915. Its shrill notes would have been used then to signal troops in the fug and heat of battle. Today troops are issued orders through the latest digital technology and bugles such as this one have an almost exclusively ceremonial role. 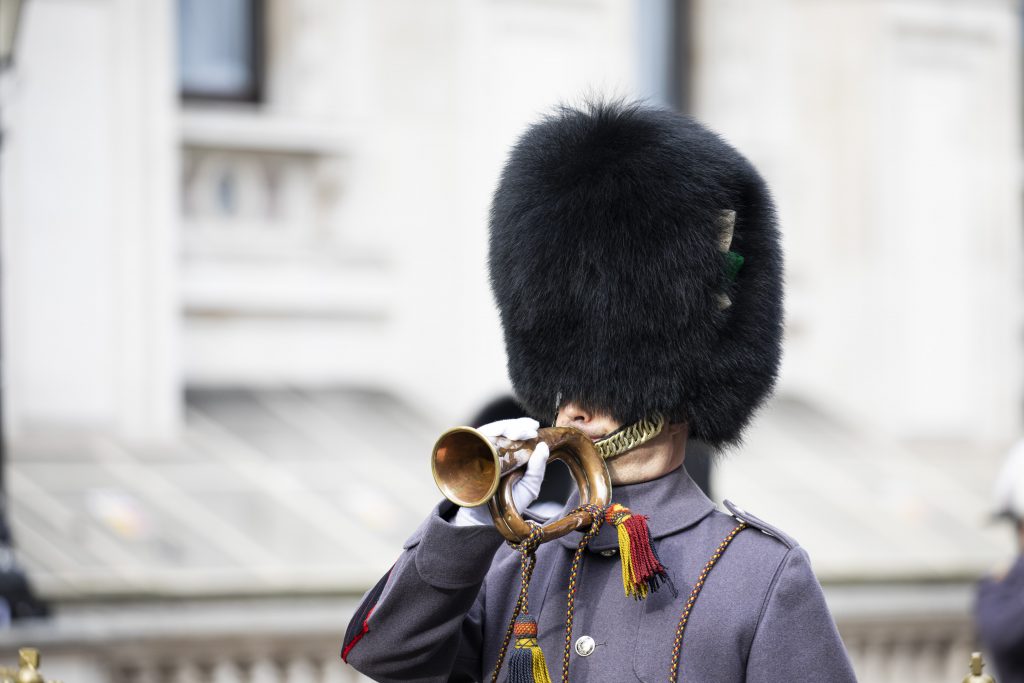 He said: “This bugle was discovered on the Somme, beside the body of a Welsh Guards soldier who will have fought during the infamous Battle of the Somme. It’s numbered 10 which means it is only the 10th ever produced for the regiment. Taking part today is massively important, not just to me but to everyone who enjoys the freedoms those soldiers sacrificed everything for. To be able to share a connection with this event is a huge honour.”

Major-General Christopher Ghika, General Officer Commanding London District, and his senior staff accompanied representatives of the Western Front Association for a small socially distanced ceremony at the Cenotaph to mark the anniversary on this Armistice day, honouring all those who made the ultimate sacrifice in the First World War. Stringent measures have been taken to ensure the safety of public and personnel for the commemorative events this year, which have had to be scaled back or cancelled due to the pandemic, and the commemoration of the Cenotaph Centenary and the Return of the Unknown Warrior are no exceptions. 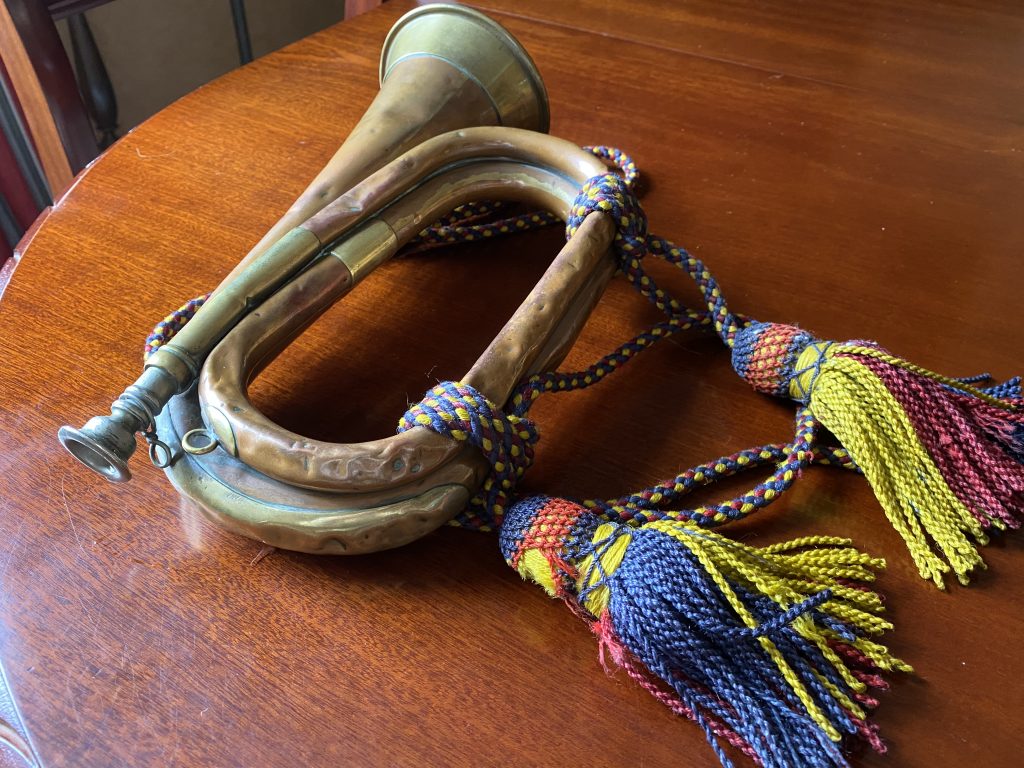 Stuart was born in August 1976 and joined the Army in 1997, joining the Band of the Welsh Guards as a cornet/ trumpet player. Over the next 17 years, he took part in some of the most prestigious ceremonial events in the United Kingdom including tours to support the Battalion on operations in Bosnia, support to the Olympic Games in 2012, Her Majesty’s Diamond Jubilee concert, Queen’s Birthday Parades, Beating Retreat and Investitures at Buckingham Palace as well as a three-month tour of the United States of America. He was privileged to be able sound Last Post at many important occasions including supporting the return of fallen warriors from Iraq and Afghanistan in the OP PABBAY ceremonies, at the Buchenwald Concentration Camp, and a Service to commemorate the 75th Anniversary of VE Day – for which he received a Major General’s Commendation.

In 2015, Stuart transferred from the Regimental Band to the 1st Battalion Welsh Guards where he co-ordinates many Regimental and Association events. He last sounded the Last Post on this bugle at the service to commemorate 100 years since the start of The Battle of the Somme. During his time with the Battalion, Lance Sergeant Laing has been fortunate to support many important events including a Battlefield Tour for The Drapers’ Company (where he sounded Last Post at many battlefield sites including Vimy Ridge Memorial, Menin Gate and the Australian National Memorial at Villers-Bretonneux).