I get sent a lot of books in my role as editor, you could say it was one of the perks of the job. At the same time, I get that many, I must pick and choose what I can write about and whether they are worth writing about.

This is probably a tad unfair on the plethora of excellent works that come before me, but in modern life, time is key, as with anyone, yet Jay Morton’s new book “Soldier” caught the eye immediately and I was unable to put it down from receiving it.
The literary world is perhaps saturated with a flurry of military autobiographies over the years, such to an extent it has stifled the market at times.

Yet, as Jay alludes to in his prologue, this is not his life story (as in his own words in an interview to come, he’s got much more stuff to do), but a combination of his experience serving within elite regiments, life skills and realism he wants to share with you.

It isn’t about gory details of secretive missions in a book Jay states he does not want the Official Secrets Act he signed to be compromised and an Act he takes very seriously.

It isn’t a sob story, nor littered with testosterone fuelled outlandish stories.

Instead, it is a refreshing turn to “life bible” if you like.

It doesn’t preach at you and say what you should and shouldn’t be doing in your life, as so many condescending life coach offerings do.

Jay merely paints a picture of his epic journey to date, using the tools of experience from his military life (and life since) to provide both an entertaining theme entwined with some sound wisdom, all of us could probably do with, regardless of where we are at with our own lives.

The content is easy on the eye, humorous, blunt when it needs to be, but always engaging.

Split into seven elements using the acronym SOLDIER (Self, Opportunity, Leadership, Danger, Intelligence, Excellence and Resilience) – each chapter doesn’t waste time on sharing what you want to know and shares an awful lot of common sense, sometimes we easily forget through the toils of life.

Of course the book includes the dangers of climbing Everest (twice), his transition from SAS operative to SAS TV star and even his days working in double glazing (which assisted his mole character on the famed TV show all those years later), but it is much more than that.

The cover subtitle reads “Respect Is Earned”. Jay’s first foray into the world of books certainly commands mine.

SOLDIER by Jay Morton is out Thursday November 12 2020. 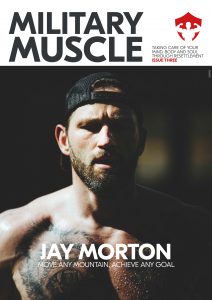