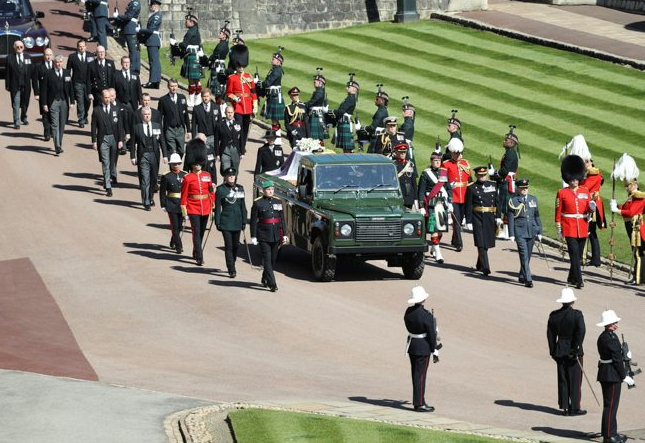 Image of the Duke Of Edinburgh’s coffin, borne on the Land Rover he helped to design.

Representative detachments from all three Services drawn from units with a special relationship to His Royal Highness took part in ceremonial activity.

The King’s Troop Royal Horse Artillery fired a minute guns during the funeral procession from the East Lawn of Windsor Castle – one round every minute during the procession.

The Armed Forces have also conducted Ceremonial Gun Fire at nine locations across the UK and Overseas Territory Gibraltar to begin and end the National Minute Silence immediately before the funeral service. A single round was fired at 1500, followed by a single round at 1501. In Gibraltar, the Ceremonial Gun Fire fired simultaneously with the UK at 1500 British Summer Time. As this is a National Minute Silence, Her Majesty’s ships at sea are not requested to fire.