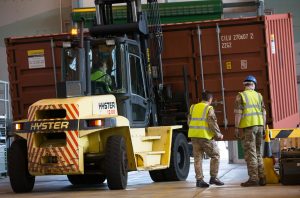 In addition to supporting the NHS, and other Government departments during the current Covid-19 Pandemic, the Royal Air Force has begun deploying for their latest NATO Air Policing mission.

The RAF Wittering based 2 Mechanical Transport Squadron has begun the task of delivering vital equipment and spares to Lithuania where RAF jets will be based as part of the NATO Baltic Air Policing Mission this summer.

As well as contributing to the Government’s COVID-19 Support Force, the Royal Air Force’s commitments to the defence of the United Kingdom and NATO continue. One such commitment is the NATO Baltic Air Policing Mission, known by its military name as Operation Azotize.

2MT Sqn’s drivers have been collecting equipment, spares and airfield support vehicles from RAF Stations across the country. The equipment and vehicles are then being prepared and delivered for onward shipment to Lithuania. By the time the jets arrive 2MT Sqn will have moved over 400 tonnes of equipment to Lithuania.

Flying Officer Lucy Heal from 2 MT Sqn Headquarters said: “2 MT Sqn Ops have been busy co-ordinating a vast amount of critical equipment to be conveyed to the Sea Mounting Centre at Marchwood, Southampton and then moved to the air base once it gets to Lithuania.”

Another of the RAF Wittering based A4 Force units that is deploying is, 5001 Squadron. The squadron is the ground engineering spearhead for the RAF and once in Lithuania, the deploying detachment will build an environmentally controlled storage shelter and ready the existing aircraft shelters for the Typhoons.

Flight Sergeant Leon Moxam the 5001 Sqn Detachment Commander said: “Deploying the team in advance is crucial to provide the engineering support for the aircraft to operate effectively. I will be leading the team through a rapid build phase, which will then allow another dedicated section of our qualified Electrical and Mechanical Technicians to support the aircraft.”

Group Captain Jo Lincoln the Station Commander at RAF Wittering and Commanding Officer of the A4 Force Elements said: “To be effective in policing the air, the Royal Air Force needs the logistics and engineering support which the A4 Force Elements provide. We ensure we have the right people and equipment on the ground to sustain the air mission.”

The Group Captain continued: “Everything we’re doing right now to support the government’s COVID-19 operations, we are doing in addition to our normal duties. My team are doing brilliantly. Their normal work in sustaining Defence’s operational output is exemplary, and they are ready to support the Government’s response to COVID-19.”