The Scots Greys, The SAS & The Sultan Of Oman – The Military Life Of Sir Ranulph Fiennes OBE 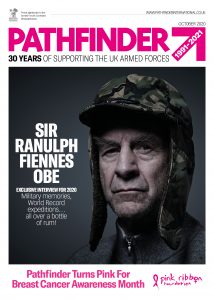 Pathfinder International is delighted to welcome Sir Ranulph Fiennes OBE in an exclusive interview for 2020 which is held in two parts. The second part of our interview looks at Sir Ranulph’s amazing expeditionary adventures. The first part below discusses his military days, leading to his own resettlement journey, something he created himself. Here he tells Pathfinder editor, Mal Robinson about a brief albeit colourful Army career…

I am lucky to say there a few names remaining on my “wants” list to interview. I have been fortunate enough to speak to an array of famous and incredible motivational people in the past, yet the name of Sir Ranulph Fiennes OBE was one that had eluded me…until now.

COVID19 robbed me of a face to face meeting with the legendary explorer, yet a phone conversation was just as awe inspiring, as Sir Ranulph and I chatted for over 40 minutes on an incredible life, crammed full of achievement, adventure and industry.

I begin by asking Sir Ranulph if the notion of pushing the boundaries of travel was always on the agenda….
“My father was killed four months after I was born commanding the Royal Scots Greys near Naples, he had been wounded five times commanding that tank regiment including at El Alamein and later the landing at Salerno at the bottom of Italy. He trod on a mine before they freed Naples.

“By which time I had been brought up on stories about my dad and in the army and the only thing I wanted to do, never mind expeditions was to do what he done and become the Colonel of The Royal Scots Greys cavalry regiment.

By that time we were of course in 70-tonne conqueror tanks in the British Army on the Rhine and waiting for the Soviet army to attack and they never did and so Scotsmen got bored and started beating each other up instead and our job as Officers was to keep them from doing that by taking them adventure training.

So I became the bloke in charge of the canoe team going up all of the European rivers like the Loire, the Rhone and the Rhine and the Vaser – great to escape from tank training on the ranges and in winter time there was skiing with the team. That was fine except that I was not going to become what I wanted, the Commanding Officer of the regiment simply because in South Africa I’d not been studying the same as when I arrived in the UK, things which were called A Levels.

In his day, dad’s day you didn’t have to have A Levels to get to Sandhurst. By my time you had to have at least two of them. I tried really, really hard but could not get the A Levels, could not go to Sandhurst and if you don’t go to Sandhurst, your chances of making it to Colonel of any regiment are considerably less.

And so, I didn’t want to do expeditions, I just wanted to be Colonel of my regiment – that’s all.”

The conversation moves on to discuss Sir Ranulph’s plan b as an aside to becoming CO.

“From Mons Cadet School instead of Sandhurst, I thought they would maybe make me Colonel anyway as I will prove that even if I didn’t go to Sandhurst, I could still do it. From Mons you get a short service commission of three years plus in those days you were allowed to sign on for five years, one year at a time. So, I signed on to try and got into the SAS as I heard they had an interesting time of it, and I passed the selection course and was doing all of the continuation training type stuff.
I went for demolition as my speciality and unfortunately I got involved with blowing up civilian property with army explosives which was not popular at that time and so I got thrown out of the SAS back to the Scots Greys who were still in Germany.
The tank training was just as boring as it has been before, so I applied again this time for the Arab army of the Army of the Sultan of Oman who was having big trouble after Harold Wilson left Aden. The Soviets moved in and trained the Yemeni blokes to be against the Sultan of Oman who had a treaty with the British for over three hundred years of friendship and therefore they sent volunteer officers like me out to command various Arab forces in the Sultan’s army against the insurgents who had been trained in the Soviet Union. They were mostly trained in the Ukraine and I have to say very well armed. They were better armed than us in the Sultan’s army.”

It was during Sir Ranulph’s time with the Sultan’s army, did he think about leaving the military when his commission came to an end and his wife, Ginny helped shape the course of his life.

“The time came when I realised I definitely would not become Colonel and my 8 years maximum from Mons Cadet School was up and I was thrown out of the army and at that same time I married my childhood sweetheart Ginny and we didn’t have much money and I didn’t have an army pension. She worked for the Scottish National Trust and whilst we were up there having breakfast one day, she suggested what we could do based on what I had been doing in Army adventure training.

She told me about a guy called Chris Bonington who was also an ex-tank officer, he climbed mountains and he did it and he made a living out of it by lecturing about it after he had done the expeditions and maybe writing books. She said maybe we could try doing that.

I said we’d need sponsorship for the equipment and stuff, and she replied saying that might be possible then if we know we can give them publicity. We found at that time in the UK the media didn’t want to cover expeditions unless they were Polar”.
And that’s how Sir Ranulph became embroiled in the world of exploratory travel within the Polar regions and the rest as they say is history.

Read the second part of Sir Ranulph Fiennes OBE inside the latest issue of Pathfinder International by clicking HERE! 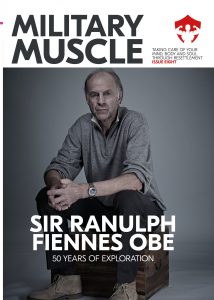