The Sky’s The Limit For RAF Fundraisers 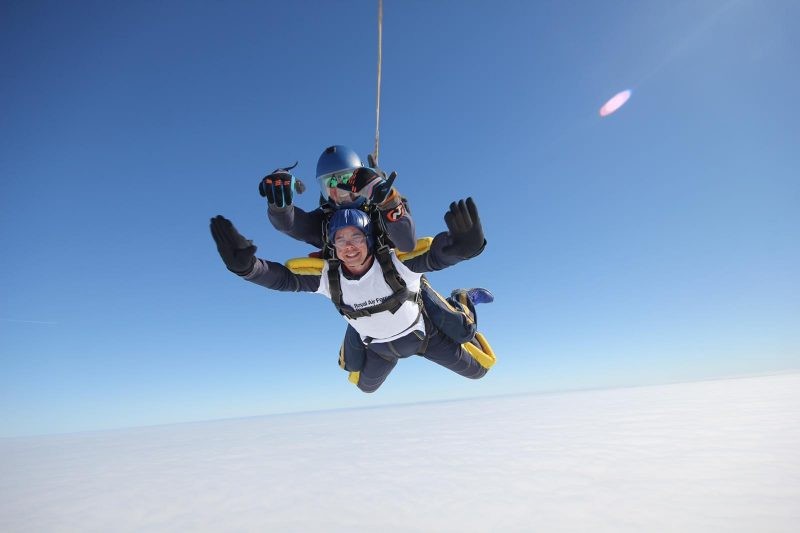 On Thursday 28th March, RAF Benevolent Fund Regional Fundraiser Aaron Tillyer joined a team of more than 30 supporters to jump out of a plane at 13,000 feet!

The intrepid group, made up of civilian contractors including organiser ex-RAF engineer Matt Hubbard and RAF personnel from RAF Marham including the Station Commander Group Captain Cab Townsend, were fundraising to celebrate the centenary of the RAF Benevolent Fund, the RAF’s leading welfare charity. The jump took place at Beccles, in Suffolk.

Aaron said: “I’m so glad I did it! I really enjoyed the whole experience. Hanging over the doorway of the plane was so surreal, and then falling into the unknown was just breath-taking. It literally took my breath away.

“Being a regional fundraiser, I speak to beneficiaries, hear great stories and see first-hand on the RAF stations the impact the RAF Benevolent Fund has on the serving and ex-serving RAF community and their families. I’m very proud to be raising money for the Fund, and I can’t wait to see what the charity can bring ahead of their centenary.”

Matt said: “This event was my way of doing something beyond the ordinary to mark the RAF Benevolent Fund centenary. It was a truly force-wide team, drawing from Serving RAF and Royal Navy personnel, industry ex-service and MoD Civilians.