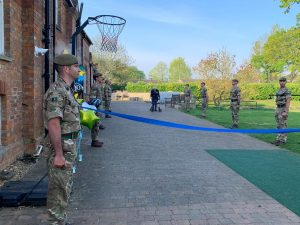 This morning soldiers from 1st Battalion The Yorkshire Regiment formed a Guard of Honour for veteran Capt Tom Moore as he completed his fundraising walk. More than £12m has been donated to NHS charities thanks to Tom’s efforts. The soldiers from 1st Battalion The Yorkshire Regiment – a modern-day unit with links to Tom’s former regiment – gathered at his home to congratulate him at a safe distance.

Tom’s family invited the troops to join him for his final lap in recognition of his pride in his military service. Nine soldiers from 1st Battalion The Yorkshire Regiment, which was formed from Tom’s former regiment, surprised Tom with a Guard of Honour as he set off to complete the final stretch of his fundraising walk. Tom served as a captain with 8th Battalion The Duke of Wellington’s (West Riding) Regiment during the Second World War.

Tom has vowed to continue walking whilst the donations keep coming in. The figure raised by Tom currently stands at £13.5M.

You can still donate to Tom’s fundraising page by visiting https://www.justgiving.com/fundraising/tomswalkforthenhs

You can also send Tom a birthday card for his 100th birthday on April 30 and donate at the same time here.