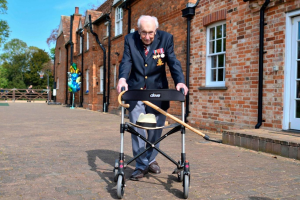 The story of Captain Tom Moore and his fundraising exploits for the NHS has captured the hearts of the nation.

The 99-year old veteran has currently raised over £18M for NHS charities by completing 100 laps of his garden before he turns 100 years old on April 30.

Initially wanting to raise £1,000 in donations, it soon became evident Captain Tom’s efforts caught the imagination of the public around the globe and the total raised sits at £18.2M.

Now a petition calling for Captain Tom to receive a knighthood has received more than 500,000 signatures, prompting a spokesperson from Downing Street to respond.

Number 10 replied that PM Boris Johnson “will certainly be looking at ways to recognise Tom for his heroic efforts.” The spokesperson wrote: “Tom has captured the heart of the nation with his heroic efforts and raised an incredible amount of money for hard working NHS staff.

He has embodied the spirit of the whole country in doing their bit for the battle against coronavirus to support the NHS and save lives.

From his military contributions to his support for NHS staff, Tom has demonstrated a lifetime of bravery and compassion.

The PM will certainly be looking at ways to recognise Tom for his heroic efforts.”

The Duke of Cambridge and Duchess of Cornwall have also made private donations to Tom’s fund.

Tom has vowed to continue with his fundraising walk as long as donations come in. You can still donate here

Read about Pathfinder’s own campaign to support our services in time for VE Day here.