UK And France Able To Deploy A 10,000 Strong Joint Military Force In Response To Shared Threats 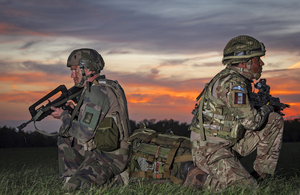 This major milestone comes as the two countries commemorate the 10th anniversary of the Lancaster House defence and security, and nuclear treaties.

Ten years ago, the UK and France signed treaties at Lancaster House on defence and security, and on nuclear cooperation. This historic commitment has helped establish a long-term partnership and provides a framework for a joint response when mutual interests are at stake.

One of the key goals of the treaties was to establish the Combined Joint Expeditionary Force (CJEF) combining two of the world’s strongest militaries to tackle shared threats. The force has reached full operating capacity and can now rapidly deploy over 10,000 personnel in response to a crisis to fulfil a range of tasks including high intensity operations, peacekeeping, disaster relief or humanitarian assistance.

As part of CJEF training, this week British and French paratroopers will come together for Exercise Wessex Storm on Salisbury Plain. This sees soldiers from the French 2e Regiment Etranger de Parachutistes (2e REP) attached to the 2 PARA Battlegroup. Both units regularly train together to maintain their partnership so they are ready to deploy alongside each other.

Defence Secretary Ben Wallace said:
“Today, the UK and France face a range of security threats of increasing scale and complexity. Having a highly capable, high readiness force is essential if we are to protect both UK security and the security of our NATO allies.
It is testament to our close defence relationship that we have achieved all the milestones set out in the Lancaster House treaties 10 years ago, working together to protect our mutual interests.”

As part of the Lancaster House treaties a number of other 10-year goals were set alongside establishing CJEF. These included building a joint nuclear facility, increasing cooperation around the aircraft carriers and developing the UK and French complex weapons sectors. All of these goals have been achieved within the 10 year time frame set by the agreements and will be taken forward further as both nations look to build on the existing work.

The UK and France are deployed around the world together in places such as the Middle East to combat Daesh and Estonia as part of NATO’s Enhanced Forward Presence. In Mali 3 RAF Chinooks and 100 UK personnel are deployed in a non-combat role in support of French counter-extremist operations.

The UK will continue to cooperate with our European partners in the future following the UK’s departure from the EU. We will continue to be a key player in Euro-Atlantic security and defence through our leadership in NATO, which will always be central to the UK’s security, our values and our place in the world.