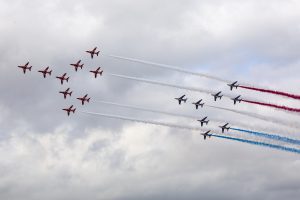 President Macron will be welcomed to London with a ceremonial Guard of Honour from The Coldstream Guards and music by The Band of the Coldstream Guards at Clarence House. A piper and bugler from the British Army will play later in the day at a symbolic ceremony at the statue of Charles De Gaulle at Carlton Gardens.

The visit will highlight the co-operation between the UK and France during the Second World War and mark the 80th anniversary of De Gaulle’s historic speech which led to the foundation of the French Resistance to Nazi occupation.

“The UK Armed Forces are honoured to welcome President Macron to London on this momentous anniversary for our closest European ally. The President’s visit is an important opportunity to remember our shared sacrifices and achievements in defeating fascism.

“We can look back on more than a century of co-operation between our Armed Forces and feel proud of what our countries have achieved, side by side at so many great turning points in history.

“The UK and France continue that close partnership today, working together from the Caribbean to Africa and the Middle East, as guarantors of peace and security.”

Today the UK continues to work closely with the French Armed Forces across the globe to combat threats to their interests and citizens. Most recently, both nations took part in Exercise BALTOPS with vessels patrolling the Baltic Sea and Exercise COLD RESPONSE in Norway earlier this year.

France has previously contributed to the UK-led enhanced Forward Presence (eFP) battlegroup in Estonia and the two countries have committed to co-operate together on the operation again next year.

Additionally, the two allies coordinate and provide humanitarian relief where necessary during the Caribbean hurricane season, including current support to the UK’s Overseas Territories.

The UK and France are also countering terrorism as leading members of the Global Coalition to defeat Daesh and UK Chinook helicopters continue to support French forces in their campaign against terrorism in West Africa.

Last week the UK announced an extension to the deployment of three RAF Chinooks and 100 personnel to the French counter-terrorism mission in Mali. The aircraft and aircrews have been in Mali since 2018 and allow French troops to cover a much larger area of operations by moving personnel to the front-line of activity, eliminating the need for dangerous road moves, and help move vital support equipment to strategic locations. So far they have completed over 2,000 hours of flying and transported over 13,000 personnel.

On President Macron’s last visit to London in January 2018, the UK and France both committed to the development of the Combined Joint Expeditionary Force (CJEF), a UK-French military intervention force to improve the interoperability of our Armed Forces. Once fully operational, the CJEF will be able to deploy over 10,000 people on land, air and maritime components together if required for a wide range of missions. Working together on this since 2010, the UK and France have made clear their continued joint commitment to defence and security cooperation.

The UK and French Armed Forces have fought side by side for more than a century. They frequently stand together to remember the soldiers, sailors and airmen and women who lost their lives in our shared fight for freedom.