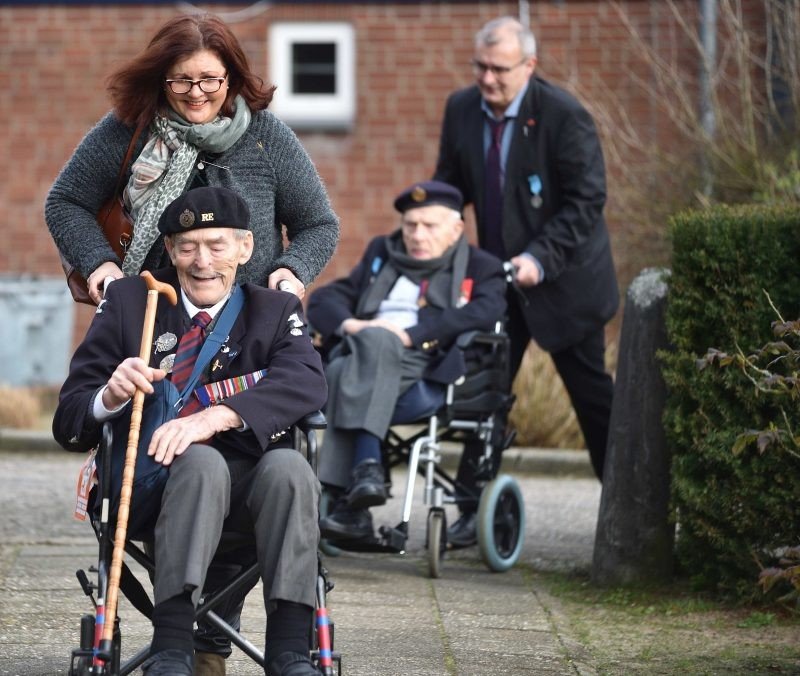 The Allies finally captured Gennep early in 1945 which was essential to open the way for the advance towards Goch and the heart of Germany. The attack on Gennep would be the start of what later became known as the Rhineland Offensive.

The group of veterans visited Gennep with the Taxi Charity for Military Veterans to remember the significance of taking the town back from the Germans and to remember their comrades who didn’t make it home.

The Rhineland Offensive would in the end make possible the total liberation of Limburg, Gelderland, the Lower Rhine area, and then finally the whole of Western Europe. Unimaginable numbers and quantities of personnel, vehicles, munitions, fuel and supplies were transported to the area and this border region became the key to the end of the Second World War.

During their stay the veterans attended services at Milsbeek CWGC, The Highland Bridge and Reichswald CWGC. They were given a wonderful lunch with all the town’s people then to the Concert Hall in Gennep for an afternoon of music and entertainment, before enjoying a private dinner with the relatives of other veterans, both past and present who attended the events.

Dick Goodwin, Vice President, Taxi Charity for Military Veterans, said: “It is a real pleasure to organise these trips to the continent for our veterans. The esteem that the Dutch people hold for these men and women who liberated them during WWII never fades and we share lots of smiles and tears on trips like these.

“As long as there are veterans who want to go and remember their fallen comrades the Taxi Charity for Military Veterans will make every effort to raise enough money to enable us to take these men and women to the continent at no cost to them.”