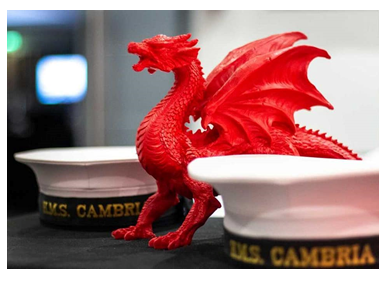 The Welsh Veterans Awards 2020 /2021 Sponsored by Sinclair Audi – Bridgend Audi and in Support of the ABF The Soldiers’ Charity recently took place on Thursday September 9 in Cardiff.

The evening proved to be a huge success.

In Wales, there are tens of thousands of former military personnel, who upon transition from the armed forces have gone on to contribute immensely to their local community. The Veterans Awards looks to celebrate these true hero’s along with the companies that support us.

The Veteran’s Awards is a not for profit organisation that promotes the positives from our military veteran community. It’s been put together by Veterans for Veterans, serving reservists and those companies that support us. We reward our community in the areas of fitness, business, health and well-being and the wider community.

This year the main awards ceremony was held at the Village Hotel and hosted by Polly James. The event was supported by the Welsh Government with Hannah Blythyn MS Deputy Minister for Social Partnership in attendance. During the evening we heard from Brigadier J Fraser MBE and Brigadier A Dawes CBE, Head of the Army in Wales and the Commander of 160th Infantry Brigade. The event was supported by Royal Navy Reserves from HMS Cambria, 1st Battalion Welsh Guards and the fantastic Corps of Drums of the Royal Welsh and Shenkin IV and the Goat Major.

The aim of the awards is to celebrate the success coming from within our community and inspire future service leavers that great things can happen when they do decide to leave the Armed Forces.

Some of the highlights of the night saw Michael Allen founder of the Endex Project from Caerphilly be awarded the Inspiration of the year award and become our Welsh Veterans Awards Champion and also the fantastic Paul Taylor MBE be awarded the Leavers to Leaders award for amazing work he has been doing with RE:ACT Disaster response especially during the Covid Pandemic. 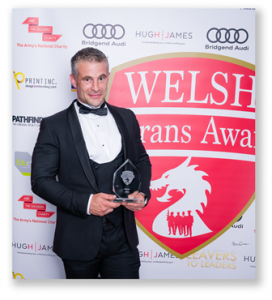 Employer of the Year- Sponsored by AB Glass – MPCT

Volunteer of the Year – Sponsored by Pathfinder Magazine – Sue Butler

“The Awards really drive a robust bridge between veterans leaving their duties and moving back into the commercial world. Not only does it recognise their efforts, it also offers them a vehicle to recognise the true value of the skills and characteristics they have gained during their service.”

These awards are extremely close to my heart. As a former serving soldier, I can understand how difficult transition is, and how we require help and guidance along the way, even at times if we don’t ask for support.”

I want our Veterans Awards and social media presence to become a place where serving military and veterans can discover some great advice and tips from veterans, who are doing truly inspirational things upon leaving the military. I hope we can inspire future service leavers that great things can be achieved with help and support.”

Pathfinder International Editor, Mal Robinson added: “I was hugely proud to be in attendance for the Welsh Veterans Awards representing Pathfinder International magazine. As official media partners for the event, we were only too delighted to promote the inspiring stories of veterans who have made a positive impact on their communities.”