Armed Forces To Set Up Vaccine Sites In Scotland 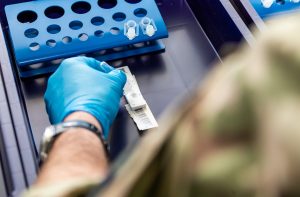 The British Army is establishing 80 new COVID-19 vaccine centres for NHS Scotland from today (Monday 18th January) as part of the largest peacetime resilience operation ever undertaken by the UK Armed Forces. Ninety-eight soldiers, mainly from the Leuchars-based Royal Scots Dragoon Guards, will support NHS Scotland over the next 28 days.

Organised into 11 Vaccination Centre Setup Teams spread across Scotland, the soldiers’ remit is to support the Scottish Government, NHS Scotland and local authorities in operationalising vaccination centre sites. They will use their logistical, organisational and clinical expertise to establish the vaccine centres, before handing them over to NHS Scotland to deliver their vaccination programme.

Involving personnel from the Royal Army Medical Corps, the military team from Fife will survey suggested sites for suitability, then organise car parking and traffic flow systems, establish patient recording methods and practices, facilitate vaccine delivery to the sites, prepare storage for medicines and equipment, and conduct a smooth handover to NHS Scotland.

The Armed Forces are operating across the length and breadth of the country, using their unique skillset to ensure the vaccine reaches the very finger-tips of the United Kingdom. Our work supporting the new vaccine sites in Scotland complements the extensive preparation and planning the military are already conducting to support the vaccine roll out programme. Using the logistical expertise of military personnel, honed in warzones around the world, frees up NHS Scotland and Local Authorities to continue to focus on administering the initial 900,000 doses provided to Scotland by the UK Government in January.

For us all, vaccines are the light at the end of the tunnel. I’m very pleased that the expertise of the British Armed Forces is helping the Scottish Government get vaccines into arms as quickly as possible. The UK Government is supplying and paying for vaccines for the whole of the UK – it is now vital that these doses are administered as soon as possible.

The UK Government is supporting all parts of the UK during the pandemic. That includes our unprecedented furlough scheme, delivering the bulk of daily testing in Scotland, and providing the Scottish Government with an extra £8.6 billion to support Scotland’s covid response.

Our vaccination programme covers all parts of the UK and I’m proud the armed forces are supporting the largest rollout in our country’s history.

We have already vaccinated more than 3.5 million people across the UK and this is rapidly increasing every day as more vaccine sites open, providing easier access for people.

We are making strong progress on our commitment to offer vaccines to all of the most vulnerable people in the top four priority groups by the middle on February.

UK military support to the Scottish authorities is commanded and controlled by the Joint Military Command staff of 20 personnel in Stirling. This team is directing the 96 troops as they deploy from Leuchars in 11 teams to set up the 80 vaccine centres across Scotland – from Wick to Wigtown, as required. There are a further 32 UK military planners working in support of the Scottish Government team in St Andrews House, Edinburgh, and across Scotland’s 14 health boards.

Examples of UK military support to the Scottish authorities during the pandemic include: RAF medical aero-evacuations from Shetland, Orkney and Arran in support of the Scottish Ambulance Service; planning advice in the setting up of the NHS Louisa Jordan facility in Glasgow; staffing all mobile COVID-19 testing units across Scotland for much of summer 2020.

Across the UK there is a record 5,600 personnel committed to winter and COVID-19 operations are supporting 64 different tasks in the UK and abroad – this includes the vaccine rollout, NHS support and community testing across the UK.