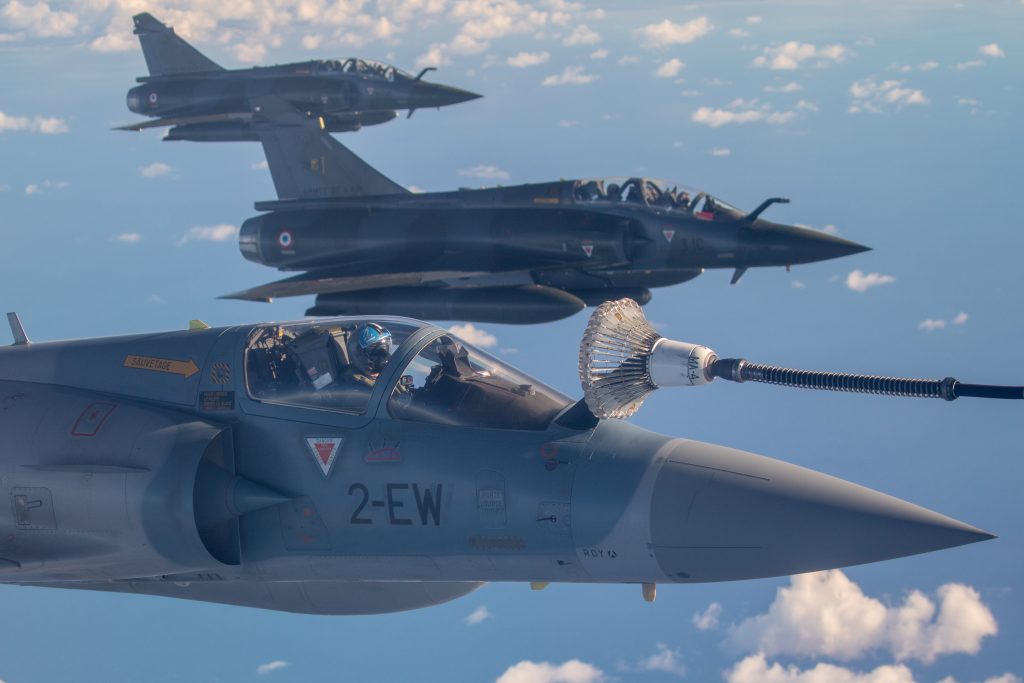 Describing the mission, Air Cdre Tim Below, the Defence Attaché in Paris, said

“Great to see French Mirage aircraft taking fuel from a RAF Voyager yesterday as they flew from France to a French airbase in Africa. This mission clearly demonstrates the close Franco-British relationship and our ability to work together to rapidly project air power across the globe. In doing so we have both improved our techniques and validated our procedures to ensure we are ready to act as part of the Combined Joint Expeditionary Force.”

The Voyager tankers based at RAF Brize Norton in Oxfordshire provided Air-to-Air refuelling for the French jets throughout their near 4000-mile journey to North East Africa to take part in their Exercise SHAHEEN.

“Planning is undertaken by an Air-to-Air Refuelling Co-ordinator (AARC) who arranges and controls all aspects of the task. In this case, two RAF Voyagers in the dedicated Tanker role transferred 90,000 litres of fuel in support of the French Mission to North Africa, with one forward mounted in Greece to meet the transiting jets south of Crete for the final leg to Djibouti.”

“Missions of this nature allow the RAF to practise and demonstrate close integration with Allied Nations to extend and project military effect in support of Operations.”

The CJEF is a French-UK military force that was created following the signing of the Lancaster House Treaties by President Sarkozy and Prime Minister Cameron in 2010, and which was re-affirmed by President Macron and Prime Minister May in 2018. The CJEF recently declared full Operational Capability and this mission was a timely demonstration of the regular cooperation between the RAF and the French Air & Space Force.