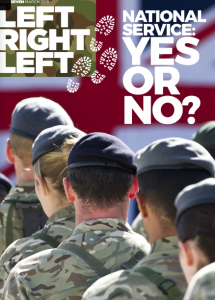 SSAFA, the Armed Forces charity has found that 66% of Brits would support the reintroduction of National Service in the UK, thanks to the values instilled during military service.

53% think re-introducing National Service would teach discipline and respect to young people and 42% feel it would result in decreased levels of crime within society.

SSAFA calls on the public to celebrate their vital work this Armed Forces Day, especially after their key role in the fight against COVID-19.

Of the two-thirds (66%) of those surveyed who support reintroducing National Service to the UK, more than three quarters think that it should be compulsory – with everyone aged over 18 enlisted inclusively, regardless of gender or background.
When asked how they thought reintroducing National Service would positively impact society, 53% of those surveyed thought it would teach discipline and respect to young people, and 42% said it would result in decreased levels of crime.

In addition, 41% of those surveyed thought introducing National Service would result in a sense of pride and higher morale within society and 39% felt it would restore lost values to society.

When asked what best describes how they felt about those who had served or currently serve in the UK Forces, 75% of those surveyed said they felt proud or grateful of both veterans and service personnel. The outbreak of COVID-19 has seen military personnel, both regulars and reserves, working tirelessly to help combat the virus by supporting those on the frontline, such as the NHS, Police and key workers.

Sir Andrew Gregory, CEO at SSAFA, the Armed Forces charity, comes from a family proud to have served for generations. He explained: “The pandemic has shown again the adaptability and dependability of our Armed Forces. Men and women from all backgrounds have stepped up to underpin the vital work done on today’s frontline in the fight against this virus. They have demonstrated yet again selfless commitment, respect for others and much more, all of which are core to service in the British military. While serving and beyond, those who serve bring skills and values from their time in the military back into wider society.

“Armed Forces Day is an opportunity to respect and thank those in the Royal Navy, Royal Marines, British Army and Royal Air Force who protect our freedoms, put the needs of the Nation before their own and add so much to the fabric of daily life. SSAFA calls on the nation to join us showing our pride in the Forces community”.

SSAFA is calling on the British public to celebrate those who serve this Armed Forces Day, as the vital role of the military has been proven once again during the recent outbreak. The charity supports serving personnel, veterans and their families during times of hardship, providing practical, financial and emotional support when needed.

To help SSAFA continue their vital support, head to SSAFA.org.uk/donate